Getting to know The New Zealand Emissions Trading Scheme

The New Zealand Emissions Trading Scheme (ETS) was established in September 2008 as a mechanism to reduce the impact of harmful greenhouse gas emissions and protect our environment for future generations.

The ETS encourages carbon emitters to change industrial, process and manufacturing behaviours, reducing CO₂ emissions. Introducing a financial cost to these behaviours is intended to stimulate investigation and implementation of low emission alternatives.

New Zealand has agreed to emitting less CO₂ in 2030 than it did in 1990. To reach our national commitment targets for climate change, the ETS provides a market to move the cost of these emissions onto the businesses that cause them – effectively putting a price on the ability to emit carbon dioxide and other harmful emissions into the atmosphere.

One tonne of carbon dioxide (CO₂) or its equivalent in other greenhouse gasses, represents one New Zealand emission Unit (NZU) – Also known as a carbon credit.

Businesses that emit greenhouse gases buy carbon credits to ‘offset’ their emissions while they transition to low emission alternatives.

Each year, sectors of the economy report to the government on their annual greenhouse gas emissions. Those emitters then surrender back to the Crown the equivalent number of carbon credits to offset the measured volume of greenhouse gasses they produced.

NZUs are primarily created through forestry, because trees absorb carbon dioxide and emit clean oxygen back into the atmosphere.

Forest owners can claim the amount of CO₂ sequestered (removed from the environment) in NZUs which can then be sold to businesses that need to offset their emissions.

These carbon credits are bought and sold between carbon producers and carbon emitters, causing the value of NZU to rise and fall based on supply and demand.

Emitting businesses can decide whether to invest in other emission reducing methods and technologies such as recycling, waste management, solar power and electric vehicles. Alternatively, they may absorb or pass some of the cost of emissions onto customers.

Since the Emissions Trading Scheme began in New Zealand, the value of NZU has fluctuated however prices have increased overall since mid-2013. This means that demand for NZUs is increasing and other pollutant reducing approaches have not been sufficient to reduce the environmental impact. 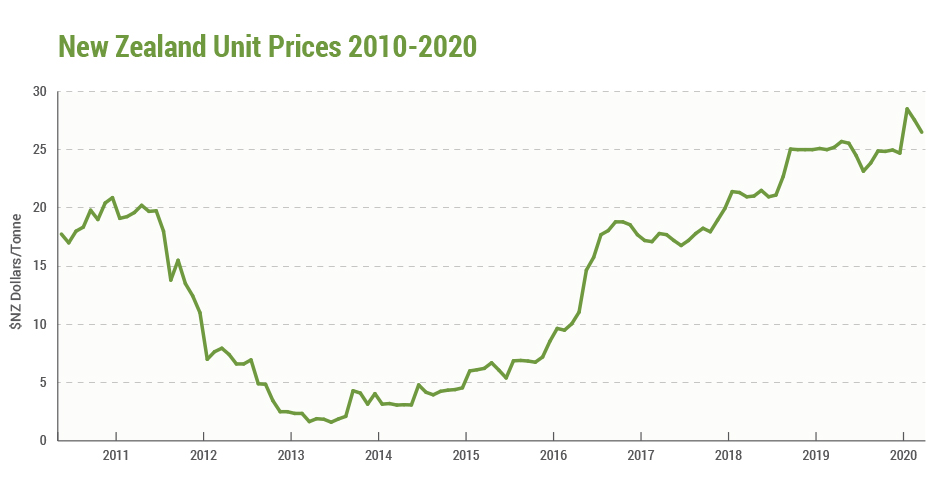 The market NZU price has been volatile. The government has introduced several measures over the past ten years to help businesses adjust and prepare for having to offset their emissions. These included:

The Emissions Trading Scheme has proven its effectiveness and delivers an excellent marketplace for New Zealand owned carbon farmers to create an income while contributing to the climate solution.

With a long-term perspective and regular reviews of the global and national emissions reduction landscape, New Zealanders can be confident of a low-emission future.

New Zealand has the space, climate and capability within its forestry sector to justify its ambitious 2030 Paris Agreement carbon reduction targets.

Our forestry sector is vital to generating the required NZUs to offset the impact of industry on our environment. As the largest forestry participant in the Emissions Trading Scheme, NZ Carbon Farming is at the forefront.

NZ Carbon Farming’s forests currently sequester 4.5 tonnes of carbon from the atmosphere every minute of every day. At the same time, the company is delivering significant value back to Iwi, farmers, landowners, and forest owners. In 2019 it paid $9,717,963 in annual lease payments to its partners, creating work and opportunities for communities across New Zealand.

2010 – New Zealand Carbon Farming Group (NZCF) is founded with a shared vision “preserving the planet for future generations”. Its focus is generating carbon credits from forestry.

2010 – NZCF purchases its first established forest in Canterbury converting it to a permanent forest and registering the forest into the ETS.

2010 – NZCF creates its first partnering opportunities with forest owners – enabling them to derive carbon income from their forests.

2014 – Over the prior three years NZCF becomes the largest new forest tree planter in New Zealand.

2019 – Climate Change Response (Zero Carbon) Amendment Act. Provides a framework for climate change policies under the Paris Agreement. Establishes the Climate Change Commission and sets a target to reduce net emissions to 0 by 2050

2020 – Over the prior 10 years, NZCF have removed 20 m tonnes of emissions from the environment – the equivalent of the emissions from every car in New Zealand for one year

If you are a landowner or forest owner and want to understand how you can benefit from Carbon Forestry – contact New Zealand Carbon Farming and learn how you can make a difference to your future and actively contribute to climate change mitigation.